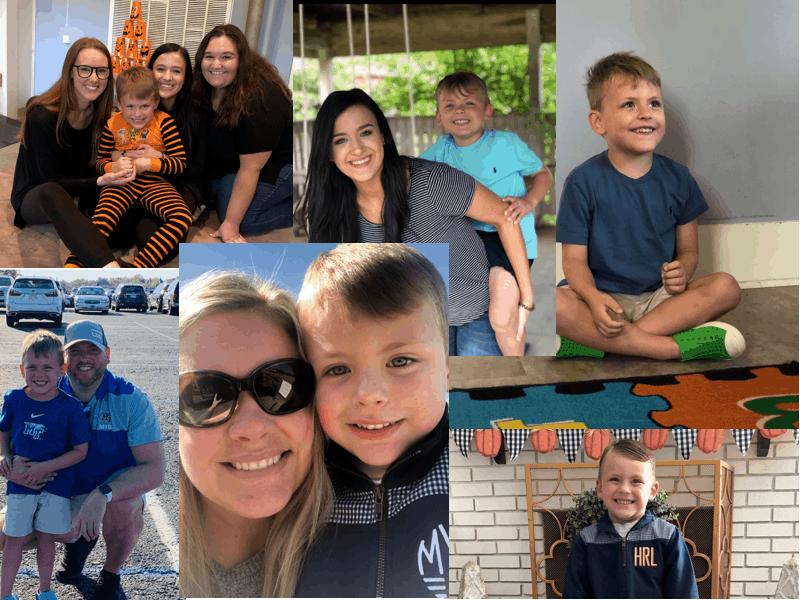 "Before coming to Autism ETC, our lives were a perfect storm of meltdowns and frustration,” said Chelsea York. She and her husband James have faced and overcome many obstacles with their son, Meyers. Their story is featured as Autism ETC’s March family of the month.

Chelsea began, “Meyers was developing perfectly until about twelve months of age. That is when I started to notice his progress was changing. A few months after that, I noticed a lack of communication. As time progressed, Meyers became more difficult to manage. He couldn’t communicate his wants and needs, and he became frustrated.” Both of Chelsea’s parents are educators, so their backgrounds helped them understand what Meyers was going through. “Although he had hit other milestones on time,” she said, “he was delayed in his ability to
communicate and comprehend.”

At the time, the family was living in Fredericksburg, Virginia. They were able to get Meyers on a waiting list to see a developmental pediatrician. “We waited about eight months for our appointment, and on February 14, 2018, Meyers was diagnosed with autism.” Meyers attended Head Start while in in Virginia, but he made limited progress. The family moved back home to Nashville in December, 2018, and they immediately enrolled Meyers in the local Head Start program. He was in a classroom with other children with special needs. However, his progress was again limited.

Chelsea continues, “I drove past Autism ETC and decided to check the center out. We got on the waiting list, and initially, we were interested in the summer camp program. As we learned more about ABA therapy, we decided that it would be a good option for Meyers. He started receiving therapy for half days during the summer. In August, we started full time in the Day Therapy Program.” Prior to coming to Autism ETC, Meyers had limited communication and he would say no more than two words at a time. “He was very reactionary to being told “no,” which would lead to him falling to the floor and having a meltdown. Meltdowns would occur as many as fifteen times per day. Because of this, we were unable to leave the house very often. A nice, fun day was a rare occasion. He could not enjoy life because he was always reacting to something.”

It took Meyers a little while to acclimate to Autism ETC. After almost a month, he finally fell into the routine at the clinic. “The staff worked tirelessly to get him on board that first month. One day, it just clicked.” Meyers began to love the one-on-one attention and interaction with therapists. His communication skills skyrocketed and he progressed quickly. Before long, he was speaking in full sentences. “The difference was amazing and remarkable!” said Chelsea. “He
began to use words that are incredibly descriptive. The meltdowns diminished substantially. Within three months of starting therapy, meltdowns became a rarity. It was a massive improvement.” Meyers quickly mastered many of the skills he was being taught, so the staff made changes to his program to ensure he was continually challenged.

When asked about how the parent training has impacted her, Chelsea responded, “I learned I had been parenting wrong for a few years. When I saw how the staff handled inappropriate behaviors and celebrated good behaviors, I learned I was sometimes making things worse at home. I was excited to learn new techniques I could use with Meyers outside the clinic. The staff show me the correct ways to handle difficult situations. They freely share their knowledge with me. I enjoy the parent training I receive each month. I can implement the skills they teach at home. For example, during the last parent training session, the staff asked me to describe Meyer’s behavior triggers at home. In the past I would have had a lengthy list. However, thanks to the progress he has made, I had a hard time coming up with an answer. The list has almost vanished. There is a night and day difference with him.”

“The staff at Autism ETC has been so helpful,” Chelsea said. “They encouraged me to allow them to work with Meyers on potty training. I was initially terrified about this. However, in less than a week, he was potty trained. I was dumbfounded.”

When asked what advice she would give other parents, Chelsea responded, “I would say sign up for anything and everything that will help your child. Get on waiting lists. It took us six months to get into Autism ETC. Get involved with support groups on social media and make friends with other families. There are other families enduring the same struggles. I was not given any real direction when Meyers was diagnosed. It can be lonely when you start on this journey.”

In looking to the future, Chelsea said, “A few weeks ago, we began to consider enrolling Meyers in kindergarten. We believe the progress he is making at Autism ETC will allow us to enroll him after another year of services. With the help he is receiving, I believe he will have an amazing start in school. I believe he will be able to succeed in a typical classroom setting. In the future, I see Meyers attending college, having a career, getting married and having a family of his own.
I believe anything is possible!”